On July 13, Chip Michalove, owner of Outcast Sport Fishing, reeled in by far the biggest hammerhead shark recorded off the coast of South Carolina. And after taking a photo with the animal, he followed his standard operations for large sharks – he quickly tagged and released her, and watched her swim off into the ocean a few miles off the shore of HIlton Head.

Chip estimates that the shark was 13 1/2 feet long and, based on length to weight tables, probably weighed over 1,000 pounds. He catches and releases a number of great white sharks, but they are much bulkier. A similar length great white would be closer to 2,000 pounds.

The record hammerhead for South Carolina was caught off the coast of Charleston in 1989. This fish weighed 588 pounds, a record that still holds. If Mr. Michalove had been a different kind of fisherman, he could have killed the shark and put his name into the record books, probably for good.

These large sharks will be around until the end of August, feeding on the tarpon that thrive in the rich waters off Hilton Head. Large tarpon and other game fish are just one reason that Hilton Head was named as one of the top 10 US summer fishing destinations for 2022.

See sharks for yourself

The large sharks are miles off the coast, but you may see a baby or two if you watch the anglers who fish from the beach in front of Captain’s Walk. While they rarely catch anything worth eating, they do real in baby sharks and small rays. Walk the beach at the right time, and you might just find some fossilized shark teeth!

If you want to catch (and release) sharks yourself, there are a number of trips you can take right from Hilton Head. There are several areas where sharks breed, and during a trip of just a few hours, you are pretty much guaranteed to land a number of sharks, some maybe even close to three feet. But for the big ones, you will have to hook up (pun intended) with a charter company like Outcast. 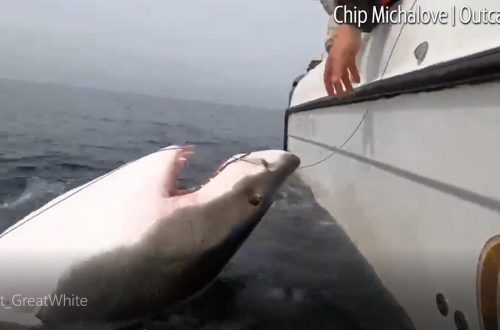